In February 1942 my father, Major John Monro, escaped from a POW camp in Hong Kong with two colleagues and made his way across China to the administrative capital at Chongqing, 1500 miles away. It was a bold enterprise as the Chinese 5th Columnists were as dangerous as the Japanese, and the escapees would have to rely on Chinese government forces to help them. They travelled on foot, by truck, train and boat and had many adventures along the way. They eventually arrived safely in Chongqing 2 months after they had left Hong Kong. All three men were awarded the Military Cross for their bravery. Using my father’s diary entries and letters written at the time, I have summarised their trip. 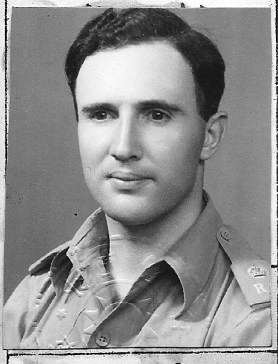 The Battle of Hong Kong

Eight hours after the attack on Pearl Harbor in December 1941 , the Japanese attacked the Allies on the other side of the Pacific. Why attack Hong Kong? According to Oliver Lindsay, military historian, in personal correspondence with my father, “after moving into French Vichy Indo-China the US, UK, Dutch etc. put trade barriers and embargoes against the Japs which prevented them getting oil, tin, rubber, etc. Their imports of oil were cut from 80 million barrels in 1940 to 8m in 1941. They had the choice of losing face by withdrawing from Indo-China and South China, or securing these prizes by war!” 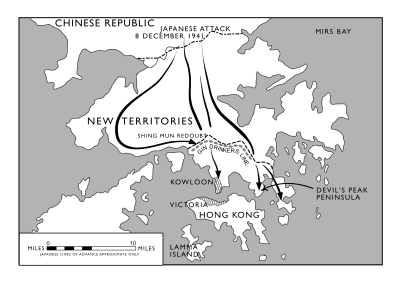 A fierce battle raged for over two weeks. The New Territories were poorly defended and quickly fell, leaving only Hong Kong island in the hands of the Allies. My father describes a decisive battle:

I rang up to ask Jack Fox what the position was at Wong Nei Cheong.  I could hear the machine gun fire down the phone.  He had been manning one himself.  “Tell Pat” he asked me.  Quarter of an hour later I rang up again, this time I got Tim.  He said that they were surrounded and fighting a tremendous battle with small arms: “What else is there to do” he said in a rather humorous, resigned tone of voice.  That was the last we heard of them.  Wong Nei Cheong was taken.  It was the key point of the island.

By Christmas Day the battle was lost. Within days the troops were marched across to Kowloon and imprisoned at Sham Shui Po. My father regarded it his duty as an officer to attempt to escape. Over the next few weeks he made plans and gathered two fellow officers who were prepared to join him, Flying Officer Baugh (later killed in a flying accident in Burma in October 1943) and Captain Trevor, who spoke Cantonese having worked for the Kowloon-Canton Railway. There were many potential obstacles to consider:

By going to Sham Shui Po one great obstacle to escape (the crossing to the mainland) would be behind us.  Should I take food across in the hopes that I would be able to make a quick getaway, or should I take clothing in preparation for a long stay?  I was undecided and made a compromise.  I took a little food but a lot of clothing.

We had both seen and heard much about the work of the 5th Columnists, and I had heard that when the Japanese took Canton, treachery and bribery were the chief reasons for the fall of the city.  As a result we thought it was impossible to trust any Chinese, particularly in or near Hong Kong and that if we were unfortunate enough to meet one unexpectedly, he would betray us. We had also heard that there had been considerable guerrilla activity north of the border, but we imagined that they were probably Freelances over whom the Chinese government would have no control; that the term “guerrilla” was an euphemism for “bandit”, and that if we fell in with any of these we should be murdered. We estimated that the distance from Hong Kong to the border was between 70 and 80 miles.  We decided to avoid if possible contact with the Chinese, to travel entirely by night, to lie up by day, and to carry sufficient food for ten days, by which time we hope to make Waichow.

The date was set for the evening of 1st February 1942, coinciding with a full moon to facilitate night travel. They gathered food, medicines, a compass and some cash and made a raft to carry these supplies as they walked out of camp along a submerged breakwater (K in the sketch) and then swam across the bay to L, which took almost an hour. 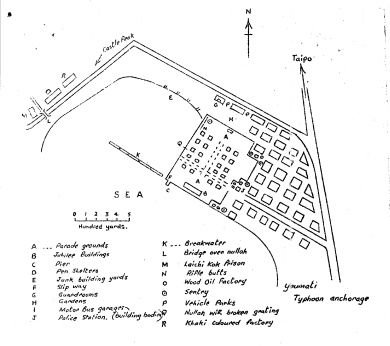 For the next 5 nights they made their way through the hilly terrain of the New Territories. Progress was slow and difficult, but at least they were in familiar territory. Just before the border with China they met with the bandits they had dreaded. They were led to a farmhouse and told to wait.

After a couple of hours two Chinese arrived; one with a bad tempered and shifty expression who appeared to be the leader of the gang, the other spoke English and had been a steward on a British Freighter and knew Liverpool well. For a time they refused to believe that we were escaped prisoners but thought we were Japanese spies. We had with us packs, food, some equipment and watches.  All these they viewed with the greatest suspicion, particularly the watches. Of course when the Jap catches any of them their valuables are immediately removed and their heads are usually chopped off; so I don’t really blame them.  They could not understand how it was, if we really were prisoners, we had been allowed to keep all these things.  They refused to believe that we had swum out of camp. “How is it” they asked, “that your packs and clothing are dry?”  We explained to them that we had carried them on a raft, but they could not believe that the Japanese would allow us the opportunity to build such a thing.  They were only convinced when they found that the shorts in our packs were still wet and tasted salt.

The party walked north along the railway, which had been torn up by the Japanese. Once in contact with the Chinese forces, they were given help, accommodation and food. They arrived in Waichow on 12th Feb, shortly after the town had been razed by the Japanese, who had terrorised or murdered the inhabitants and left just three days before. Their arrival coincided with Chinese New Year, which was celebrated as usual, delaying their progress. From Waichow they headed for Longchuan, travelling by boat up the East River.

Finally we got a passage up the river.  We travelled in two boats; the leader had a charcoal gas engine and looking like a long floating potting shed, I travelled in a large flat bottomed barge, covered with matting, about 55feet long and ten feet beam. It looked just like a black water beetle, though inside it was beautifully clean, this was towed behind the leader. There were about 30 people in the leader which was the smaller of the two boats, and which used to list in an alarming manner as its passengers moved about.  In the larger there were about 70 people.  As it was only about 60 feet long overall and quite large areas in the bow and stern were reserved for cooking and the crew you can imagine how crowded we were. We were literally packed like sardines.

The boats kept breaking down and at Heyuan they changed to a sampan.

The sampans were far more fun than the motorboat.  There is about a 3 knot current in the East River and going up stream they are slowly poled along.  I suppose our sampan was about 35 feet long.  We had on board about 20 people.  Grandma steered, Grandpa, son and his pregnant wife did the poling.  We used to start about 6.30am.  They went on without a stop till about 10 when we tied up for the morning meal.  At about 11 they started again and went without a break till about 6.00pm where we tied up for the night; during which time we covered about 20 miles.  An astounding feat.

From Longchuan they headed for the wartime capital of Guangdong province, Shaoguan, this time by truck.

Trucks are few are far between in China.  Though the magistrate was helpful and sympathetic, the official in charge of transport was a fat, self-important nit wit. When we did get a bus it was a closed truck with two small windows on either side, one behind and one in front with a completely closed back.  Inside it was almost 5 feet high. Into this enough luggage was put to cover completely the whole floor to a depth of two feet.  Into the space above we crammed 34 people. The drivers were very unwilling to unlock the rear doors, partly because it was a rather long process and partly because at every opportunity we would jump out to stretch our aching limbs and it took a very long time to put us back in again.  To add to our comfort about 50% of the other passengers were constantly car sick.

They continued by train to Guilin (via Hengyang). Here they met the Chinese Marshal in command of a large part of the Chinese army, who supplied them with passes to travel on to Chongqing. 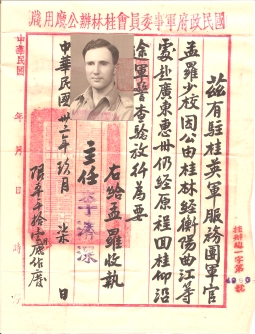 Our next objective was Guiyang.  We started out by train along the new railway which is being built. We travelled on this for about 36 hours.  It is a magnificent piece of engineering.  At one place we travelled over a wooden bridge crossing a deep ravine As you looked out of the carriage it was impossible to see anything of the bridge till you saw its base in the ravine, it gave the unpleasant illusion of being suspended in space. From Hechi (the railhead) we were given seats on the next bus to Guiyang. This time it was a proper bus with numbered seats.  It was much more comfortable that the Shaoguan buses.  The petrol pump went wrong on the first day so it took us nearly 3 days to do the journey which is normally done in two.  It is about 280 miles but it is very steep country. We stayed two days in Guiyang and then we got into a fast convoy of trucks going up to Chongqing.

We arrived at Chongqing about midday 31st March, just two months after we had left Sham Shui Po.

My father was sent to India for an appendectomy and then returned to Chongqing in August 1942 as Assistant Military Attaché.  He spent the next 18 months supporting and trying to liberate the POWs he’d left behind in Hong Kong. In July 1944 he was sent to Burma to fight the Japanese, eventually returning to England in early 1945. Baugh went on to Bombay but was killed in a flying accident in Burma in 1943. Trevor returned to the Kowloon-Canton Railway after the war.

5 thoughts on “My Father’s War”